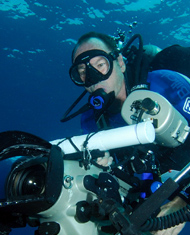 David Hannan is an Emmy Award-winning cinematographer based in Queensland, Australia. Hannan built and owns one of the largest independent marine footage libraries in the world, amassing hundreds of hours of spectacular, high-definition underwater sequences. His cinematography is featured in some of the world’s most successful natural history projects, including The Blue Planet, National Geographic’s The Shape of Life, David Suzuki’s The Nature of Things, and his own programs, including Coral Sea Dreaming – a Celebration of Reefs. Hannan has also worked with Rob Stewart on his documentary features Sharkwater and Revolution. Hannan is the co-founder and director of the Ocean Ark Alliance, a high-profile collective of scientists, filmmakers and artists who are focused on both regional and global marine conservation initiatives.