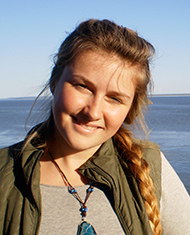 Emily Hunter is the daughter of Greenpeace’s founding president Robert Hunter. As a second-generation activist, she has campaigned on global environmental issues, while attempting to ignite youth in a new kind of eco-revolution. She hosted and co-produced four TV documentaries on MTV News Canada, ranging from the tar sands to the Toronto G20 protests. She is the editor and author of the book The Next Eco-Warriors, a collection of short stories by a new generation of change-makers. No stranger to action, she has battled on the high seas of Antarctica to save whales with Sea Shepherd ; coordinated climate work party events across Canada, was part of the 350.org global day of action in 2010; and joined protests in the Borneo rainforest trying to end deforestation. Currently she speaks to youth around the globe about a new generation rising up in a new kind of youth revolution and was selected as one of the Top 100 Speakers for 2012 in Campus Activities magazine.