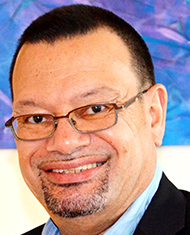 Ronald Jumeau is the roving Ambassador for Climate Change and Small Island Developing State Issues for Seychelles, a tropical island nation spanning an archipelago of 115 islands in the Indian Ocean. Witnessing firsthand the increasingly serious effects of climate change, Jumeau has become a globe-trotting activist for the survival of his country and other island nations. Seychelles faces a double jeopardy in our climate crisis, with ocean acidification destroying coral reefs, which the country depends on for tourism and fisheries, as well as the sinking of the nation with the sea level rising. Some experts predict much of the archipelago could be underwater by the end of the century. Previously in Jumeau’s career he was a journalist and the Chief Editor of the Seychelles Nation daily newspaper. He subsequently became a political figure, holding several ministerial posts, including that of Minister for the Environment and Natural Resources, before being posted to New York from 2007-2012 as Seychelles’ Permanent Representative to the United Nations and Ambassador to the United States, Canada, Brazil and several Caribbean islands, among other titles.